The Historic Town Of Castlemaine 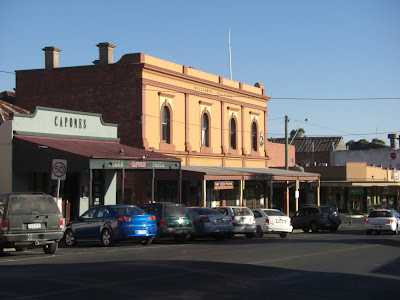 The Historic Town Of Castlemaine

Four men, supposed to be herding cattle and sheep, abandoned their work one sunny day in 1851 and headed towards a nearby creek. They started digging and, as luck would have it, they struck gold.  What followed was the influx of gold diggers numbering about 25,000.  Gold discovery triggered an economic boom for the town of Castlemaine. Gold brought prosperity to the town and the nearby areas.

Castlemaine lies in a fertile valley where three creeks run through it.  It is near Mount Alexander. After the gold rush, when population declined, residents turned to agriculture as their means of livelihood. Today, what one sees in Castlemaine are old buildings and structures that speak well of its glorious past. They have retained that Georgian style of architecture that makes them magnificent. Tourism is a thriving industry.

At the height of the gold rush, one delivery of gold to Melbourne from Castlemaine usually weighed about 3 tons.  Castlemaine was then the biggest producer of gold in the whole world. Gold was easy to dig in Castlemaine.  What used to be a quiet, small town became the toast of the world, the pride of the colony of Victoria. Many enterprising individuals seized the opportunity and became rich.

Back to the four men who discovered gold at Castlemaine.  They chipped gold from the rocky portion of the creek through hammer and chisel and kept this a secret.  They worked quietly and wanted very much to maximize their haul.  One reason that they were keeping it to themselves was the fear that authorities would seize and take control of the area where there was gold. But the secret was not for long.  Soon all roads led to Castlemaine.  That was the start of the gold rush in a place that would later be known as Australia's goldfields region.

Melbourne Zoo
Wombat is a marsupial mammal that, like the kangaroo, carries its young in the pouch.  It looks like a badger but is not a badger. When threatened by Tasmanian Devils, it runs and hides inside tunnels and holes. The Black and White Colobus, on the other hand, is a type of monkey that is endemic in some parts of Africa.  And these two animals are top attractions at the Melbourne Zoo.

The Melbourne Zoo is only a few kilometers away from the City proper.  The zoo is situated in a vast tract of land which was designed to resemble closely the natural habitats of the more than 300 species kept in its fold. The Australian wild bush, for instance, is recreated at a portion of the zoo where kangaroos and koalas roam around.

Melbourne Zoo authorities have the safety of the visitors as their primordial concern. The lions are kept in enclosures that make it impossible for them to slip or get through. Visitors watch from an elevated platform that is also enclosed by cyclone wires. Accidents are kept to a minimal level.
Now, while inside the zoo, make sure you wear comfortable shoes.  You will be walking and covering long distances. While the viewing itself is entertaining, it can also be tiring. With different species kept in what appears to be their natural environment, it takes hours to cover the entire zoo. With calluses on both feet giving me the ache, I was able to cover only 3/4 of Melbourne Zoo.  Anyway, I can do it again next time.