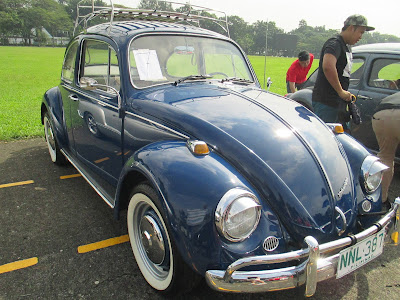 Today, Sunday, hundreds of VW owners, enthusiasts and plain kibitzers motored to the Main Parade Grounds at Camp Aguinaldo in Quezon City for the 32nd Annual All Classic and Customized VW Car Show. They came from various parts of the country such as Nueva Ecija, Pampanga, Bulacan, Batangas, Laguna, Cavite, Quezon and Baguio City. One VW owner drove all the way from Tacloban in Leyte.

Diverting from the usual aligned parking, VW owners positioned their vehicles next to each other to form the VW logo with a drone hovering over the parade grounds to record the unusual formation. It was a brilliant idea that gained the nod of viewers. VW owners were more than willing to cooperate.

Volkswagen became popular here in the Philippines in the 60s and 70s. Beetle, Kombi, Fastback, Tradback and, yes, the Sakbayan were a common sight in Metro Manila and in other parts of Luzon and the Visayas. Today, we still see a lot in mint condition.

In today's show, an eye-catcher was a red convertible Beetle with its seat upholstery in immaculate white. The rear wheels had caps that enhanced its beauty. A long 4-door Beetle stood out from the rest. Visitors were milling around a grey Karmann Ghia with its engine looking show-room fresh. Overall, each VW had its own strong points that made it unique. It was not surprising that judges had a difficult time picking the winners in various categories. See you next time. 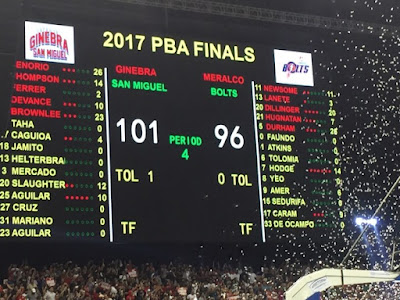 For all the marbles. Do or Die. Sudden Death. 54,086 basketball-loving fans trooped to the Philippine Arena in Bocaue, Bulacan last October 27, 2017 to witness a fitting finale to a hard-fought and exciting conference dubbed as PBA's Governors' Cup. It broke existing record for crowd attendance.

The Philippine Arena is the world's largest indoor stadium. It stands on a 144 hectare property of the Iglesia Ni Cristo in Bocaue and extends to the neighboring town of Santa Maria in Bulacan. It was built in 2014 with a staggering cost of P9.4 billion.

Game time was 7 pm. We were lucky to have tickets for Patron D, which was only a few meters away from the Ginebra bench. But being too close to a team's bench, with the popular Ginebra bench at that, it could be a drawback. We felt pain in the neck trying to get a clear view of the playing court as officials and utility men blocked our view. Not to mention throngs of Ginebra diehards trying to catch a glimpse of their favorite players.

With LA Tenorio and Scottie Thompson orchestrating Ginebra's offensive thrusts and behemoths Justin Brownlee, Joe Devance and Japeth Aguilar providing the much needed points, Ginebra built comfortable leads of 14, 16 and even 20 points as the Gin Kings tightened their defense to stave off the much-vaunted outside shooting of the Meralco Bolts.

With only a few minutes left, when everybody thought it was all in the bag, Meralco made one last surge and trimmed Ginebra's lead to just a single digit. Timely baskets by Devance, Brownlee and Tenorio doused cold water on the Bolts' rally.

As confetti rained all over the coliseum, Ginebra fanatics stormed the playing court to take pictures of the victorious Gin Kings. Somebody stepped on my shoe, a girl bumped me from behind. Pandemonium broke loose. But what else would you expect? It's Ginebra winning back to back titles. And when Ginebra wins, the whole nation celebrates. Kampai !!!

Tamagoya: The Best Ramen In Town 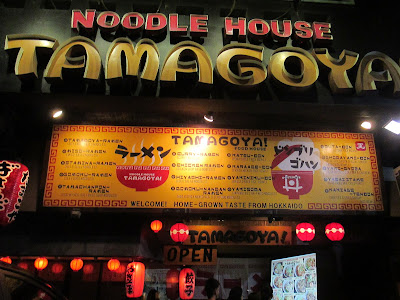 Tamagoya: The Best Ramen In Town


It was served piping hot. The big bowl of Gomoku Ramen, with thick and firm noodles, had shrimps, squid, pork strips, mushrooms, young corn and mixed vegetables on top. Slowly, I began slurping the broth. I was careful not to burn my tongue. The broth was so good that there was no need to add condiments.

Tamagoya Noodle House, located at Lower Antipolo near the Masinag area along Sumulong Highway, serves the best ramen in eastern metropolis. And that is a categorical statement. I am saying that without reservations. Point-blank, so to speak. And prices are affordable.

Managed by a Japanese national, Mr.Abe, Tamagoya started as a modest noodle joint next to a Japanese auto parts store. While the car parts store had closed, the noodle house has expanded and, in fact, has occupied two storeys. Customers have been coming in droves and Mr. Abe has deemed it wise to concentrate on Tamagoya.

I was now slurping the tasty noodles. There was this quail egg partly covered by a pea. No longer mindful if my tongue would get burned, I munched it and, then, partook of the shrimps. As side dishes, there were plates of Kara Age and Yaki-Gyoza. I was now sweating on the forehead. Still halfway, I momentarily stopped and looked at my granddaughter. Smiling, she said: Ang ingay mo, Wowo. Pero sige lang. With that, I was back slurping what to me was the best ramen in town.