Juan Luna: His Bristle Brush And His Smoking Revolver 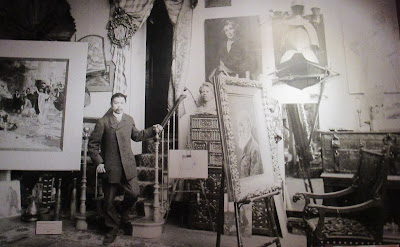 Juan Luna: His Bristle Brush And His Smoking Revolver

Juan Luna, elder brother of General Antonio Luna, shook the world in 1884 when his oil painting entitled Spoliarium won a gold medal at the Exposicion Nacional de Bellas Artes in Madrid, Spain. Spoliarium, which is now on display at the National Museum, shows vanquished gladiators being dragged from the arena after fierce combat.


Born in Badoc, Ilocos Norte, Juan came from a well-to-do family, his father being called by friends and acquaintances as Don Joaquin. He and his other siblings studied at the Ateneo Municipal de Manila. Wanting to have further studies and training in painting, he traveled to Europe and had Paris as his base. His circle of friends included Jose Rizal, Trinidad and Felix Pardo de Tavera, Valentin Ventura and Felix Resurreccion Hidalgo. Officially, he was the first Filipino to gain international recognition with his much-acclaimed Spoliarium.

Juan Luna again made headlines when, on September 22, 1892, he killed his wife, Paz Pardo de Tavera, and his mother-in-law, Dona Juliana Pardo de Tavera, in Paris. The Pardo de Taveras were rich and influential. With a revolver, Juan shot Paz in the head and Juliana near the temple. They were shot at close range. Juan did it in a fit of jealousy, accusing his wife of having an affair with a Frenchman. His friend Trinidad Pardo de Tavera was also wounded.

Painter Juan was arrested and jailed while trial was on going in Paris. After almost 5 months of hearing, the presiding judge came out with a ruling. Juan Luna was acquitted on grounds of temporary insanity. The judge viewed the case as a crime of passion. In those days, courts were lenient to an accused charged with murdering his spouse because of infidelity. Juan was set free, and with brother Antonio and son Andres, moved and stayed in Spain. After several years, they returned to the Philippines and Juan became active in the Propaganda Movement. He died of a heart attack in Hong Kong in 1899.