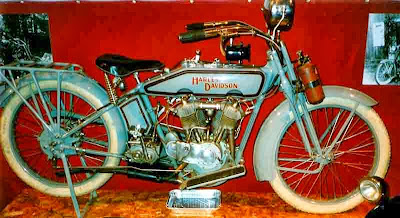 Harley-Davidson
I still remember the time when Easy Rider was shown in movie theaters in Manila. I was then a 3rd year college student at DLSU. The film was a blockbuster.  Easy Rider is about two friends who traveled through the back roads of America on board their choppers which were customized or modified old motorcycles.  At a time when the use of marijuana was in vogue and the hippies were all around America, Wyatt and Billy roamed the highways and byways in search of the real "America". Their bikes, which were tagged as Captain America and BillyBike, were originally made by Harley Davidson.

Harley Davidson bikes are heavyweight motorcycles manufactured by a Wisconsin company bearing the same name. It has been making quality motorcycles since 1901. The company employs about 6,000 workers and has an annual revenue of US $531 billion. It was founded by the Davidson brothers and William Harley.

In the movie Terminator 2: Judgment Day, Arnold Schwarzenegger was using a 1990 Harley Davidson "Fatboy", riding in tandem with the boy John.  If you watched this film using a home theater system, you would have noticed the clear, crisp sound of the Harley's engine. This scene and the accompanying sound made the opening remarkable. I still remember it up to this day.

Back to Easy Rider.  Wyatt and Billy were cruising along a lonely road in the South when two hillbillies fired at Billy at pointblank range.  Next to be shot was Wyatt.  They were shot because they had long hair and were riding customized bikes which were then identified with non-conformists.  That was the movie's closing scene. Unforgettable was the chopper of Wyatt bursting into flames by the side of the road as The Ballad of Easy Rider was playing in the background:

The river flows
It flows to the sea
Wherever that river goes
That's where I want to be
Flow river flow
Let your water wash down
Take me from this road
To some other town....

One Winter Night In Caroline Springs

One Winter Night In Caroline Springs
*for the kids

It was a chilly winter night.  I got off at the bus stop near Taylors Hill and crossed the main street to North Gate Village. With the wind blowing strong, I put on the hood of my jacket.  In a few minutes, I was trying to open the main door with the silver key but it would not open. No one was inside the house.  I waited for a home companion to arrive but, half an hour later, I was still out there in the cold. Temperature was down to 10 degrees.  It was too quiet then in Caroline Springs.

Caroline Springs is a suburb of Greater Melbourne.  It occupies a generally flat land where houses have started sprouting sometime in the early 2000. These are beautiful houses with modern designs.  There are reserves and playgrounds in key areas. Caroline Springs is under the jurisdiction of the Shire of Melton.

From the City proper of Melbourne, Caroline Springs is only about 20 minutes by train. From Flinders Street Station, you take the train bound for Sydenham with its terminal at the Watergardens Shopping Center. From there, you ride the bus to Caroline Springs. It is only a few minutes away. There is no traffic buildup in the area.

There was one option left to me to get inside the house.  And that was to scale the fence and squeeze past through the sliding window.  But I was thinking that the alarm system was too sensitive that any slight, unusual movement would trigger the alarm, and consequently, alarm the neighbors who would then call the police.

What I did was to walk back to the bus stop and flag down the Westrans bus. Inside, it was warmer. I was back to my comfort zone. I took the seat nearest the Vietnamese driver as the bus made two round trips. It served as my temporary refuge from the biting cold outside.

On the third and final trip, I got off at Caroline Springs.  There were now lights inside and around the house. I called everyone's attention. I was emoting. While they were watching, I tried again the key, but this time, it worked !! I was puzzled. Everyone was laughing. I looked like a fool. That was one winter night in Caroline Springs.