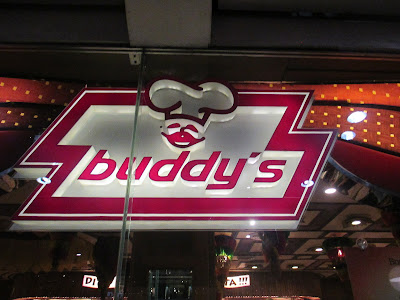 In the small, quiet town of Lucban in Quezon is a restaurant that serves the best Longganisang Lucban. People from various parts of the country travel to Lucban, which is nestled at the foot of Mount Banahaw, to savor Buddy's famous specialty. Longganisang Lucban is a Philippine sausage made of ground pork with lots of garlic, oregano and pepper added to it.

Travelers passing through Lucban on their way to the innermost parts of Quezon province make it a point to stop at Buddy's. And during the Pahiyas Festival, when thousands motor to Lucban to pay homage to the town's patron saint, San Isidro Labrador, Buddy's is filled to the rafters. Buddy's also serves Pancit Habhab, also called Pancit Lucban, which has thick noodles, sizzling sisig, sizzling gambas, fresh lumpia and many more.

But Lucban is far from Metro Manila. It is some 135 kilometers away. With this in mind, the owners of Buddy's have opened a branch at the Araneta Center in Cubao, Quezon City. It is right across the world famous Araneta Coliseum. It is also very near the Gateway Mall.

When dining at Buddy's in Cubao, noticeable are chandeliers decorated with colorful kipings and walls painted with flowers, fruits and other figures reminiscent of Lucban's Pahiyas Festival. And as you place your orders at the counter, you read that signage: "Dito sa Buddy's, Parang Laging Fiesta." As you look around you, as you smell the aroma of Longganisang Lucban and as you begin to savor its distinct taste, you tell yourself: "It's simply the best !" 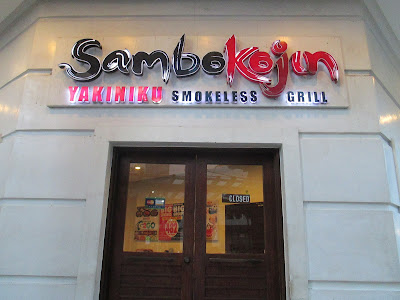 I made one fleeting glimpse of the various food stations. There was food aplenty, of course. I was taking my own sweet time. I started with five slices of bacon stuffed with asparagus, my favorite. I got quail eggs and crab sticks. There was this tendency to pick more but I resisted the urge. There was no need to have large serving of a particular food as, in a buffet, you could always refill your plate again and again. I joined my companions at our selected table.

Somebody ignited the smokeless electric grill. It was smokeless as the grill had a special hidden exhaust system. I placed my picked food as the other diners positioned their preferred bite-sized meat and vegetables side by side. This kind of grilling is termed Yakiniku.

Sambokojin, which literally means Goddess of the Kitchen, has been one of the key players in the All-You-Can-Eat business and, at this time, it has made headway. It specializes in Japanese and Korean dishes. While there are many branches, my favorite is the one at Eastwood City.

The Kaisen Kutsi Katsu, Kani Kutsi Katsu and the Buta Kushi Katsu were all delightful. The little Makis were so good that I had another round. Shrimps and salmon were satisfying. Now it was time to try the heavier ones. I was given slices of Gyuniku Rosuto, which was actually U.S. Roast Beef. It was tender and juicy. Next was the Pork Belly Roast called Buta Hara Rosuto which I found perfectly to my liking. I asked for more.

To help food moving in my tummy, I had watermelon juice. Still not contented, I had mango juice. Then suddenly I began feeling heaviness in my stomach. A sign of overindulgence. I had one tablet of antacid. That was not enough. I took one capsule of Nexium. In a little while, I felt relieved and could start moving again. I headed towards the counter that served ice cream and asked for three scoops of vanilla and strawberry. Then my youngest son whispered in jest: "Pa, gluttony is a sin. You have to confess that tomorrow." I was laughing as I watched the waiters and cooks dancing to the tune of 'Fantastic Baby'.

Lunch - P688 per person
Dinner - P838 per person
A birthday celebrant is free provided he brings in another full paying diner.