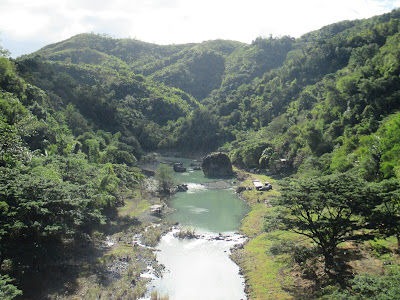 There was a roughly built shack by the side of the lonely road leading to the innermost part of the watershed. It was actually on a ridge with a commanding view of the vast Sierra Madre Mountain Range. Without asking permission, I took a seat with my companion standing near the ridge. In the stillness of the Sierra Madre, we could hear the rustling of the leaves, the chirping of the birds and the blowing of the wind. Our attention was focused on an old, historic dam where river tributaries flow and merge.

Near the end of World War II, as General MacArthur and his men were liberating Manila, Ipo Dam was the scene of a bloody fight with the American Forces fighting it out with the defiant soldiers of the Japanese Imperial Army who had been occupying and controlling the dam. It was a crucial battle as the dam was Manila's main source of water. With the help of Filipino guerrillas, the Americans seized control of the dam after almost a month of fierce fighting. More than 2,000 Japanese solders were killed.

It was almost sundown when we left the ridge and proceeded to our mountain hideaway. We pitched our tent notwithstanding the strong, cold winds that usually blow from the northeast. We had grilled pork, beans and steaming rice. In a little while, a group of youngsters arrived and pitched their own tent. It was a starry, starry night and, as expected, as midnight approached, trade winds began to make their presence felt.

The tree leaves were swirling and the bamboos were swaying. From a far distance, we could hear the faint voice of the fruit picker, singing an old Tagalog song filled with hyperboles: "Doon ay kaya kong ipunin lahat ng bituin, doon ay kaya kong igapos ihip ng hangin, doon ay kaya kong ipagbawal buhos ng ulan, sa panaginip lang kita mahahagkan tuwina, doon lang." After a short while, there was complete silence followed by snoring. The fruit picker was slumped near the haystack. He was dead drunk. Immobile and insensible.