Sangkalan On A Monday Night 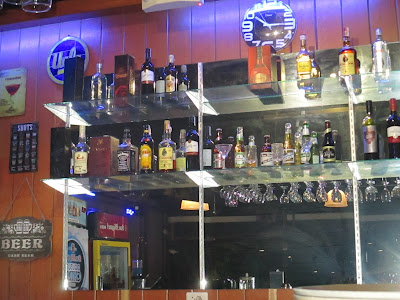 Sangkalan On A Monday Night

I tried the deep-fried pig knuckles. It was crispy, with the dipping sauce enhancing its flavor. I tried the sliced squid placed on a sizzling plate. It was tender, not rubbery as I was expecting. Next was the Pompfret or Pampano. It was meaty. I stretched my hand to the right and reached for the oysters. With a fork, I pulled out the fleshy bits, dipped them in a mixture of vinegar and soy condiments. They were fresh, really fresh. In between were occasional shots of Wolf Blass red wine.

I was not by my lonesome. I was with old friends at Sangkalan, a watering hole that took its name from the vernacular term that means chopping board. Up close, I was looking at their faces, hands, arms including their body movements. I could see myself in them. Looking at my old buddies, I could see my wrinkles, my grey hair, my bulge, my quirks.

Just when the second Wolf Bass bottle was being opened, the chanteuse was adjusting her microphone while her co-performer was preparing the keyboard instrument. As additional stage lights were switched on, the duo belted out the first song of the night, with the male singer starting out: "You'll never find, as long as you live, some one who loves you tender like I do, You'll never find, no matter where you search, some one who cares about you." It was an old song by Lou Rawls popularized in the 70s. It was Monday and it was a night of songs of the 60s, 70s and 80s at Sangkalan.

As if on cue, the "Remember when" moments began. Remember when we were cutting classes and watching The Good, The Bad and The Ugly instead? Remember when the Ateneo Blue Eagles had Marte Samson, Joy Cleofas, Chito Afable, Francis Arnaiz and Ricky Palou battling a DLSU squad that included Vince Misa, Ray Bautista, Ding de Villa, Jimmy Brown, Tommy Manotoc and Joaqui Trillo? I was listening intently to my old friends. At that moment, they seemed to have clear memory, with no signs of Alzheimer's yet.

More drinks were ordered, San Mig Light this time. Somebody asked for Cheese Shrimp Rolls and Buffalo Wings. Everybody appeared to be enjoying the moment. The conversation was lively and shifted, at times, from one on one to two on two. At one point, everybody was talking and no one was listening. So engrossed were my old friends that they forgot the time. Sangkalan was about to close and the songbird was singing the last piece for the night, a song by Bonnie Bowden: "How foolishly we tossed away the buttercups, the time. Who would have thought we would have no more songs to sing, hills to climb."