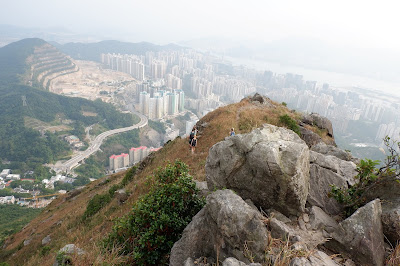 On board an MTR train, my youngest son Albert was holding his Fuji camera with his girlfriend Monette to his right. They had a satisfying meal of Crispy Pork with rice at Yuan Kee and were now on their way to Suicide Cliff which forms part of the Kowloon Peak mountain. Albert had been mentioning Suicide Cliff many times the day before and Monette was wondering why Albert was so insistent, when other places also offered good views. Always yielding, Monette looked out the window and adjusted her headphone, seemingly enjoying listening to an old song:" I can't believe it, you're a dream coming true, I can't believe how, I have fallen for you."

With light, cool wind, the two began their uphill hike, taking a trail that had some concrete slabs as steps and passing through areas that had lucerne grass. Not seasoned mountaineers and not sporting the right attire and gears, their walk was a little bit slow but their cadence changed when majestic views of the city began unfolding. In a little while, stunning sights of buildings, highways, harbor, yachts and dinghies were a feast for the eyes. They had reached Suicide Cliff, unscathed and undaunted.

Now Albert began working with his Fuji camera. He removed the leather cover, checked the lens and set the desired lighting. He took about 20 successive shots from various angles. The results were to his liking. Then he began executing his hidden agenda for the day. Setting the camera to automatic timer, he positioned the camera at a steady surface, then asked the girl to stand near the dangerous cliff. Monette did as told and, after a few seconds, Albert took a posture atop a boulder next to his girlfriend and quickly drew from his pocket a small box containing an engagement ring: "Will you marry me?" Monette was taken aback, could hardly speak and, in a whisper, replied: "Yes, with all mine to give."

Almost nearing sundown, the pair began their descent from Suicide Cliff to Ma On Shan Country Park which was their take-off point. It was much easier this time. They took a bus bound for the train station. In high spirits as his plan was executed to perfection, Albert was reviewing the camera shots. They were nice shots. Looking at their planned route, next would be Mak's Noodles for Wanton Soup. Monette, as usual, was with her headphone, obviously pleased with the turn of events. She turned the headset to higher volume, inched closer to Albert and lip synced what she was hearing: " And I want to tell you, you control my rain, and you should know that, you are life in my vein." Yes, that Lauren Wood song again !!